Sponsorship of the NFL is not cheap. However, if done correctly it is worth every penny. Campaign success can be easily achieved if you focus on the most engaged fan profiles with your NFL Sponsorship. Nearly 70% of fans who “like” or “follow” brands on social media are willing to take additional action, which includes making purchases.

Some of the NFL’s biggest consumers of social media are also the biggest spenders on gear, game day provisions, and wagering. Therefore as sports marketers, we thought it would be helpful to analyze the three categories of fans who consume and spend the most, and briefly dive into each of their personas. This can ultimately help determine how and where to reach these fans. Here they are: The Ladies of the League, the Parking Lot Partiers, and the Fantasy Fanatics.

1. Ladies Of The League

Women are not only filling the stadiums but they are fully engaging with everything football. Female fans of the NFL are watching more football on TV, playing more Fantasy Football, using more social media, and spending more money than ever before.

So who are these fanatic females and where do they hang out? Well, just like the male football fan, they are everywhere. 45% of the NFL’s 185 million fans are women, and of those female fans 63% are between 18 and 54 years old, with an even split between the 18-34 year olds and the 35-54 year olds. They play a lot of Fantasy Football (1 in 5 American women played this season). Last year, women made up 34% of ESPN’s viewers, and 46% of Super Bowl viewers. That means that more women tuned in to watch the Superbowl than to watch the Oscars.

Just like their male counterparts, women want to support their team by buying jerseys, and t-shirts and pretty much anything with their team’s logo. Since 2010, spending on women’s sports apparel has risen 76%. Women actually spend 80% of all sports apparel dollars, and control 60% of all money spent on men’s clothing.

All right, here’s a peek into the life of the average female fanatic; we’ll call her ‘NFL Nancy’. Nancy is in her late 30’s, married, and has two school aged children. She works full time, spends most of her free time chauffeuring her children to after school sports, but is sure to save an hour or so a day for keeping up with her fantasy football team. She checks ESPN.com, reads Bleacher Report and DeadSpin, and watches SportsCenter after the kids go to bed. This is going to be the year that her team finally takes first in her fantasy league. Sunday is a day for family and football.

On game day, she suits up in her lucky jersey, and makes sure that a mixture of healthy yet delicious snacks are ready before kickoff. Most of her Sunday treats are recipes she found on Pinterest. Let’s not forget that she always makes sure to post a pic of the family in their gear on Facebook and Instagram, to rub her home team’s win in her cousin’s face.

With the widespread adoption of free stadium wifi, the tailgater is quickly becoming one of game day’s biggest consumers of sports media.

Once online they read up on league scandals, adjust their fantasy lineups, and tag pictures of themselves partying with special team hashtags in hopes of making it onto the jumbotron during the game. Gone are the days of drawing straws to stand on top of the station wagon with rabbit ears to get a fuzzy picture of the pregame show. Tailgaters are more plugged in now than ever. The parking lot partiers are 24% more likely to access social media from their mobile devices at the game than other attendees and 2% more likely to download apps.

In addition to the mobile and digital provisions, these weekend warriors spend $3.5 billion on food and beverages each year on tailgating alone.

Now let’s look more closely at the man we lovingly refer to as ‘Tailgate Tom’. Tom is in his early 30’s, unmarried and does not have any children. He has a full time job and most of his free time is devoted to anything and everything sports related. He plays basketball, softball or flag football with his friends and coworkers depending on the season. He is in multiple Fantasy Football leagues, and devotes anywhere from 2-3 hours a day consuming sports media. He visits all of the big websites such as ESPN, Yahoo Sports and NFL.com.

He skims blogs such as DeadSpin, Bleacher Report, and SB Nation. He normally flips through the channels to catch highlights on ESPN, Fox Sports, or CBS Sports before going to bed each night. Saturday evenings before home games are spent shopping for snacks and beer, preferably with NFL branded packaging, and loading up the truck. Tom wakes up at the crack of dawn on game day, dawns his lucky jersey, and heads to the stadium picking up a few friends on the way. He Instagrams and Snapchats pictures of the pre-game shenanigans, finalizes all of his fantasy line-ups from his phone while streaming the Redzone Channel to his ipad.

This year 74.7 million Americans played Fantasy Football, spending $4.6 Billion on this legal form of sports competition. Football has easily surpassed Baseball as America’s favorite past time. Last year this was made clear when a record 32% of Americans proudly stated that Football was their preferred sport (compared to Baseball’s 16%) . It’s no surprise that 41% of all wagers placed at Nevada sports books ride on the outcome of football games.

Fantasy Football players consume 3 times more sports media than other fans. 61% of players say they watch more live sports, and 60% say they read more about sports because of Fantasy.

Fantasy players mobile connection is also on the rise. Yahoo’s Fantasy Sports App was number 5 on the the list of 100 most used apps in 2014. In the world of Daily Fantasy Sports (DFS), the 2 most popular DFS sites saw an 800% increase in the use of their apps and mobile websites from 2013 to 2014. Draft Kings also took advantage of their user’s eagerness to consume content online by redesigning their website to become a one-stop-shop for all fantasy statistics, research, and advice. Since the content heavy redesign of their website in March, page views have increased 52% per visit and time spent increased 152%. 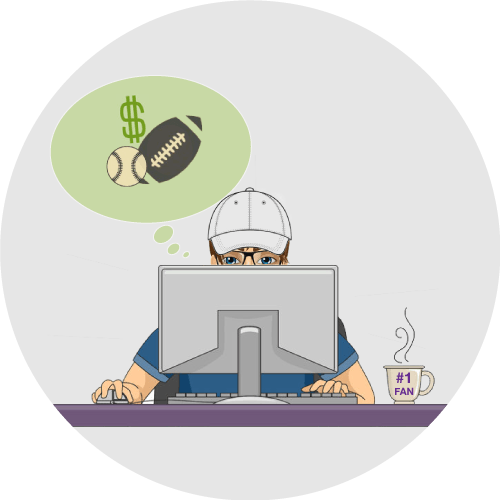 So here’s a look at the fan profile we call ‘Fantasy Phil’. Phil is in his mid-30’s. He is married but doesn’t have any children yet, and is employed full time. Phil is the commissioner of multiple Fantasy Football leagues, and an active member of a Fan Duel. Phil spends upwards of 4 hours a day reading up on players, statistics, injuries, and keeping an eye on the college football scene so that he will know who’s who at next year’s NFL draft.

Phil has his favored home team but is also tuned into individual players throughout the league, even following them on Twitter. He buys and reads all of the Fantasy Football magazines: Beckett, RotoWire, ESPN, Lindy’s, and Pro Forecast. He is tapped into every niche sports blog and subscribes to Deadspin, Bleacher Report, Awful Announcing, SB Nation, Gridiron Experts, and RotoVIz (formerly Fan Douche).

On game day, Phil is fully immersed in the two-screen (or more) experience, even though his living room is full of friends. He is watching the game while streaming the RedZone Channel on his laptop, and checking fantasy teams on his iPad while using his phone to check or post on social. Phil is fully engaged in all things football, all season long, as he has money riding on the game as well as the players.

Remember to focus on the most engaged fan profiles with your NFL Sponsorship. Your customers are out there and eager for content.

Missed the Boat on Super Bowl Promotions in 2016? | SF AppWorks

Over the years, the Super Bowl has become one of the most sought after marketing events in all of sports entertainment. With ...
Start Reading