Researchers at University of Washington have mounted a tiny, wireless, steerable camera onto the back of a darkling beetle.

“Tiny video cameras that can be mounted on bugs? How is that even useful?” *Military style knock on the door*

The object was to create a device that could be borne by a tiny robot (or insect stand-in). The team at the University of Washington had to build the camera basically from scratch to resolve issues of power availability. They engineered an ultra low-power image sensor, Bluetooth chip, lens, and antenna to yield a motion-triggered camera with a mechanically steerable ‘head’. The system can stream video to a cell phone at a distance of up to 120 meters away, for up to 6 hours depending on the strength of the battery. It’s also motion-triggered...meaning no frames are wasted when the bug is catching some Zs.

The next step is getting the mini camera airborne. In order to load the micro device on to an insect that flies, it needs to weigh somewhere between 100 and 200 mg. The researchers are toying with the idea of replacing the power system with a solar cell to mitigate battery requirements as well as shrinking the camera size. If they can achieve these adjustments, the scientists should be able to get the camera loaded on a bumblebee. So in the near future, a sting might not be the only thing you need to worry about.

Scientists in Singapore have developed noise-cancelling technology to be placed in apartment windows, reducing incoming sound by 10 decibels. 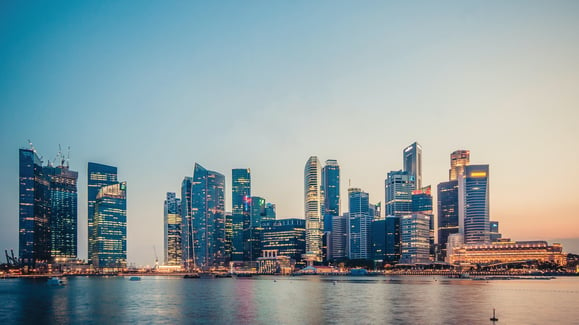 Photo by Peter Nguyen on Unsplash

How soon can we reduce my neighbor's yapping dog by 10 DB?

It’s an early prototype, but it could be a developmental guide post for future cities. It impressively tackles a double-sided problem. For many, it’s important to keep the windows open; carbon-intensive air conditioning (or the build up of stale air) are much less agreeable alternatives to letting some fresh air flow in from outside. But doing so can come at the cost of a lot of noise from traffic, loud neighbors, and public transportation. For some of the researchers who grew up in the metropolis of Singapore, finding an answer hits very close to home.

Noise cancelling technology works by emitting sound waves that neutralize the unwanted noise. The best place to neutralize sound is at the source, so researchers treated the window as the noise source, since that’s where most of the noise comes in from. The system includes a microphone that picks up on noise outside the window, which is then registered by a computer controller. Once the wave frequency needed to neutralize the noise is determined, it’s transmitted to the indoor speakers on the opposite side of the device, providing a ‘near blissful silence.’

One of the problems to work out is the system’s ability to neutralize noises that aren’t “steady,” such as sporadic blasts (think car horns, firecrackers, crashes, etc). The size of speakers required varies by frequency level (larger speakers would be needed to cancel out lower frequencies). There are some possible solutions at play, although most interfere with the long cherished aesthetics of an open window.

British startup “Biotransformation” introduces a novel technology to fully biograde commonplace plastics, leaving no adverse effects to the environment in its wake.

This is that rare type of news that leaves you breathing a little easier.

The startup is working with the Imperial College University in London at the point of intersection between chemistry, biology, and polymer science. With a new round of funding, and in cahoots with UK Research and Innovation, it will be creating the first ‘petro-plastic’ to meet international standards for home and industrial composting.

The CEO of Biotransformation, Niall Dune, explains some of the factors that have prevented a solution like this from working in the past. She names resulting ‘microplastics, lack of compatibility with recycling systems, and confusion from consumers around the recycling of packaging’ among these issues, all of which Biotransformation addresses.

The startup will produce plastics with varying degradability timelines. Cycle+ will degrade after around three years, though it can still be recycled during that lifetime. Another option, DegrAid, is created for single-use plastics, and will break down within six months. I hope people don’t use this as justification to leave their coke bottles lying around, but if they do...guess it’s only an eyesore for six months?

While 3D-printing tissues and organs itself isn’t quite novel, this exceptionally creative approach is nothing short of true innovation.

A team at the Wake Forest Institute for Regenerative Medicine led by Anthony Atala has utilized 3D-printing methods for years, although never in this manner. In constructing “organoids,” (miniature lungs and colons), they are providing a near perfect subject for experimentation: these two organs are ideal for testing, as their in-human counterparts are the most affected by the virus. Because these organoids are the purest imitation of natural organs, they can provide data points that might not be present in clinical trials. It's also better to test this way because scientists can help distinguish between what actually works in humans instead of animals.

The process is complex. It’s not as easy as feeding a machine some data and pressing "print." A biodegradable scaffold is loaded with microscopic channels through which to deliver nutrition. For tissue, a gelatinous bioink is printed into the scaffold, and this is all before the issue of blood vessels is addressed. Says biomedical engineer Akhilesh Gaharwar, “Even to us it sometimes seems like science fiction.”

JackTrip, an open source software developed by Stanford researchers, has become a new cornerstone of improv and composition capabilities for musicians affected by COVID-19 quarantine.

The Covid-era has unearthed all sorts of old technologies that are suddenly relevant. I wonder what’s next?

This reminds me of these two guys that started a music collaboration platform 10 years ago. I wonder what happened to them?

When the beat drops

We’ve all experienced the sound delay on a Zoom or Skype call that makes for interrupted thoughts and awkward moments. But for musicians hoping to virtually practice, too much ‘latency’ is typically enough to make the whole endeavor seem futile. When jazz pianist Dan Tepfer lamented this plight on Twitter, he laid the foundation for a new community of artists working with innovative technology to compose, practice, and even generate revenue by performing through remote networks of scattered artists.

JackTrip was developed by Stanford University researchers Chris Chafe and Juan-Pablo Cáceres. What sets the software apart is its ability to transmit high quality audio data across the Internet. The sound quality and low latency emulate a person playing music from around 30 feet away—the general threshold musicians require to properly synchronize. JackTrip has become centric to Dan’s new quarantine routine, giving him the ability to jumpstart a community of fellow musicians who were previously not able to practice, but are now composing music and live-streaming concerts to fans.