Hope everyone is staying safe and healthy!

Check out the benefits of small, intense exercise bursts throughout the day, and if it sounds like something you want to try, download our free pushup tracker.

Pursuing the depths of the human subconscious, a team of researchers at MIT is building technology to mine a puzzling frontier; they hope to tap into the meaning in dreams.

We spend a third of our lives doing something we barely understand.

The role of dreams has long been a source of study and speculation. Research links the odd human behavior with memory function, mental health, and emotional regulation. Over at MIT, they're hoping to further what little understanding we have by actually interfering with the dreamscape.

Kicking off in 2017 under the umbrella of MIT's "Media Lab Fluid Interfaces Group", the Dream Lab is developing new wearable devices that can be used to track and interplay with dreams. The goal in mind is to leverage dreams as doors to deeper cognitive functions, with subtle alterations leading to benefits in the conscious life.

The image above pictures one of the devices—Dormio. Sensors wrap around the user's wrists and fingers so that it can monitor an array of movements from muscle tone, to heart rate, to skin conductance. By identifying the different stages of sleep, it can recognize hypnagogia—the mystical space between dreamland and consciousness. At this point, it plays a preset audio cue and then records any sound that may be produced by the user. Studies using Dormio are already in motion, seeking some link to deep creativity.

Another device created by Judith Amores (researcher at Dream Lab), Bioessence, also uses a sensor to record heart rate and brain waves, but differs in that it spurts an aromatherapeutic scent into the air which is associated with a user's specific memory. She believes that the encounter with the scent during a dream will help strengthen the memory without disrupting the sleep cycle.

A collaboration between computer scientists and biologists births 'Xenobots.' The mixed-life form is the first of its class.

Let's all take a moment and think about what's happening here—robots with living components that can regenerate. This is either the coolest or the scariest advancement in technology that we've seen. Or both.

This jaw-dropping development is the product of many minds, universities, and departments, for that matter. After linking up on a Skype call for a separate DARPA project, Dr. Blackiston, a biologist at Tufts, inferred that he had a solution to computer scientists Sam Kriegman and Doctor Bongard's problem.  Professionals of varying disciplines came together from the University of Vermont, Tufts, and Harvard when they realized some living frog cells could be used as a host for computer programmable behaviors.

After AI systems computer-generate a selection of feasible lifeform bodies with premeditated functions, the designs are assembled using a "cell-based construction toolkit." A human judgment follows, deciding which Xenobots are most apt to perform the desired action, and are assigned a score accordingly. The less capable designs are terminated and overwritten by "randomly modified copies" or better equipped designs. Rinse and repeat.

The study describes the urgent advantages of building technology out of biocompatible materials that can self-renew. These findings suggest the possibility of using living mechanisms to deliver drugs safely to the body, collect micro-plastics in the ocean, or even clean out human arteries!

I need to have my senses restored from the shock of reading this.

A computer chip is implanted in the patient's brain, allowing doctors and computer scientists to interact with neural signals. While previous studies indicated that sensory signals were all but defunct in paralytics, research scientist Patrick Ganzer's work reveals that although weakened, the signals are still present. With a medley pot of technology, movement through these pathways can be boosted into the patient's perception. The method is said to go beyond improving motion in paralyzed limbs; it can actually restore the sense of touch.

Although motion and sense restorative technologies are already in existence, this study is unique because it focuses on restoring sensation in real limbs rather than robotic arms or hands. The team tested their ideas on a 28-year-old man who lost feeling in his arm in a car accident 10 years prior. Tapping into residual touch signaling using BCIs, researcher Patrick Ganzer could, in essence, facilitate a miracle.

Motion detectors, pressure sensors, 'anus camera' 🤭, and urinalysis strip—ladies and gentlemen, I present to you: a smart toilet that monitors for signs of disease.

Researchers at Stanford University are back at it, reporting less-than-appetizing innovations in a new paper for Nature Biomedical Engineering. Technical add-ons to an otherwise conventional toilet are able to derive the health of excreta and test for various diseases, including certain forms of cancer. The team is working in collaboration with physicians to ensure the toilet collects data most relevant for medical interests.

The team conducted a study in which 300 volunteers were asked to use the toilet in a gender neutral bathroom near the laboratory. The toilet analyzed the excrement, then Seung-min Park and his colleagues collected samples after every visit (just another day on the job, eh?) to test by traditional laboratory methods for comparative analysis. This could be transformative in monitoring health and diagnosing early-onset disease.

While conclusions from the analysis validated the toilet's effectiveness, the study lacked enough data to shed light on how the toilet could diagnose disease in "real time." Another main drawback to the current technology is concern over privacy (understandably so with the anus camera). 30% of the study's participants reported feeling uncomfortable using the smart toilet. For now, Park remains focused on developing the toilet's usability.

Furbo, a smart device with a rolodex of impressive features, is now rolling out AI help with pet sitting, as well as deciphering the message your dog is sending you by bark type. 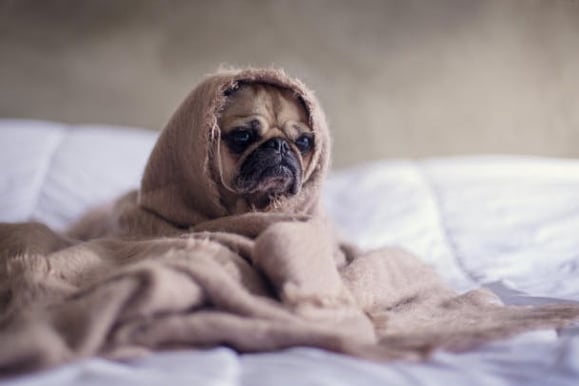 Photo by Matthew Henry on Unsplash

The landscape of technology for pets is widening before our eyes, with devices that can remotely dispense a treat or even throw a ball while an owner is at work. Andrew Bleiman, who presides over Furbo, explains where AI comes in—to help evolve what we know about animal behavior. When a camera is fixed on a dog all day, the amount of data it gathers is overwhelming.

While interesting tidbits like 'a Newfoundland typically barks around four times a day vs a Husky's 36' are already circulating as a result of devices like Furbo, newer algorithms seek to detect more unusual behavior. Companies in this industry hope to shift the focus from simply easing dog parents' minds to making milestone discoveries for animal wellness.

For Cool Cats and Kittens

One toy, Felik (made for cats), has some extra impressive high tech features. Using machine-learning models, the device separates the room from the objects in it (including people) by semantic segmentation. This allows the device to locate the cat and predict where he or she is about to go, creating a playful laser-chasing game.