Expert Tips On The Difference Between MS SQL and MYSQL.

Comparing MYSQL vs. MS SQL is an ongoing debate in a space where data-driven business intelligence, analytics, and reporting workloads simply couldn’t exist without the support of these two widely used enterprise database systems.

Nearly every website comes equipped with a database that stores, retrieves, and modifies data to deliver a specific output. Understanding the basics of relational database management systems (RDMS) is an integral part of web development strategy and design.

These days, developers have various options for RDMS to choose from in accordance with their specific requirements per project. While the preference is up to the individual developer or programmer, the options basically boil down to open-source database systems and commercial (or closed source) database systems.

SF AppWorks has been helping companies reach their full digital potential for a decade, which includes picking and setting up databases.

In this article, we’re going to discuss both types of database systems. More specifically, we’re going to compare and contrast the MySQL vs MS SQL server. By assessing their pros and cons, we’ll address which database server is best suited for large enterprises and SMEs.

As a programmer or web developer, it’s essential to understand all of the differences between the MySQL vs. MS SQL servers. That way, you can choose the right type of RDMS for each project.

MS SQL stands for Microsoft Structured Query Language, meaning that it’s a standard language for accessing and managing your databases. By using MS SQL, you can:

Since MS SQL is a commercial source database system—produced by Microsoft—you will have to purchase the proper licensing to use it.

On the other hand, MySQL is the open-source database version of SQL for which you can also store data in an already existing database. All you have to do is download and install the software, and you can use its customizable codes for free. Both servers are written in C and C++ languages. However, MySQL only supports the English language, while MS SQL can support a variety of languages.

Check Out This Episode Of Our Technology Podcast: The Next Great Thing

MySQL can support common platforms, including:

By supporting a variety of operating systems, MySQL offers large enterprises the versatility and options they need to run their database systems. And it enables SMEs to leverage these same database systems for a low cost. If an enterprise decides to change operating systems, MySQL can migrate to a new system without compromising the database or its structure.

MySQL is even used for some of the most popular websites and social media platforms, including Google, Facebook, and Twitter. Large sites utilize MySQL because the MySQL server allows programmers and web developers to keep the databases that already exist organized, whereas MS SQL does not.

When it comes to the supported program languages in the MySQL vs. MS SQL comparison, MySQL is once again the more favorable server. It’s important to note, however, that both MySQL and MS SQL support many of the same programming languages, including:

In addition to these program languages, however, MySQL also supports:

Are you debating if you should outsource your software requirements? Discover 10 powerful benefits of outsourcing programming in 2020.

MySQL can support multiple storage engines, which means that programmers and developers have a choice. They can choose a storage engine based on speed or reliability. They also have the option to use a plug-in storage engine.

Of course, to make use of multiple storage engines, programmers and developers would have to upgrade from the earlier versions of MySQL, which only supported non-transactional storage engines. Once upgraded, MySQL offers much more flexibility than MS SQL in terms of storage engines, which is another plus.

When it comes to filtering data, both database systems support features such as filtering tables, rows and columns. The MS SQL server offers more flexibility by adding the capacity of row-based filtering. By utilizing the row-based filtering option, a query can filter any data by database, rather than running multiple queries. The filtered data can then be stored in a separate database for distribution. MS SQL simplifies the process by filtering multiple rows at a time without worrying about keeping track of the number of databases used.

When it comes to filtering data, both database systems support features such as filtering tables, rows, and columns. The MS SQL server offers more flexibility by adding the capacity of row-based filtering, which saves a decent amount of time while backing up or restoring data. It also requires less effort because programmers and developers don’t have to extract SQL statements. This is one of the conveniences of a closed (commercial) source database system.

With MySQL, when a query runs, programmers and developers have no means of stopping the SQL execution process. It’s one of MySQL’s more significant disadvantages.

Another benefit of a closed source database system is the security that it provides. Both MySQL and MS SQL database systems were designed as binary collections. However, MS SQL is much more secure than MySQL.

In an SQL server, other processes cannot manipulate or access the data. That means hackers and third-party applications cannot directly access the database or binaries. Programmers and developers are required to perform very specific functions to manipulate their databases.

The MySQL server allows programmers and developers to utilize the server’s binaries to manipulate the data within the databases. Because of this, the databases are vulnerable to SQL Injections and can be accessed and modified by hackers and other third-party applications during run time. While MySQL is more open to attack, there are ways to protect against SQL Injections.

As a licensed RDMS, Microsoft SQL offers in several different editions for purchase:

Picking the right one requires comparing the various aspects of each while taking into account your specific project needs.

There are also special additions of the SQL RDMS server:

These are better known as proprietary extensions and don’t necessarily replace either the SQL or the MySQL as a whole.

The Microsoft SQL commercial source server offers each of its additions to fit the project-based needs of programmers and developers as well as the number of users. As mentioned above, several proprietary RDMS are open-sourced and can integrate with each of the editions offered.

MySQL, on the other hand, was designed to meet the needs of modern web applications. It’s very common for web developers to integrate MySQL with Lamp Stack in addition to the Linux operating system, the Apache web server, and the PHP programming language. Of course, the capacity for integration falls on Lamp Stack as its components are interchangeable, allowing multiple programming languages to be used.

It’s a toss-up between the two database servers as there are several combinations of stack component integrations that can be used with several editions of each.

Since the MS SQL server requires licensing, there is a lack of community support. This means that if programs and developers run into issues, they’ll have to either figure it out on their own or contact the Microsoft Server support. This means when you run into problems,  you won’t likely find an immediate solution.

With MySQL being an open-source database system, programmers and developers will most likely be able to find a solution to their problems immediately via internet MySQL forums and MySQL communities. This is a great advantage because rather than explain the issue to an automated menu or outsourced customer service representative who is unfamiliar with the technology, you can find answers from real people—who have most likely faced the same problem.

Here’s what programmers and developers can get their hands on for free:

From there, it gets much pricier. For example, the MS SQL Server Standard edition costs about $3,717, and the Enterprise edition costs about $14,256. MySQL sells its Standard edition based on a yearly subscription starting at $2,000. Additionally, its Enterprise edition will run you about $5,000, and its Cluster GCE doubles that at $10,000. Regardless of the technology, price is always a factor to consider as it may be the deciding factor for many programmers, developers, and businesses alike.

Related Link: NoSQL vs. SQL: Which is Better? 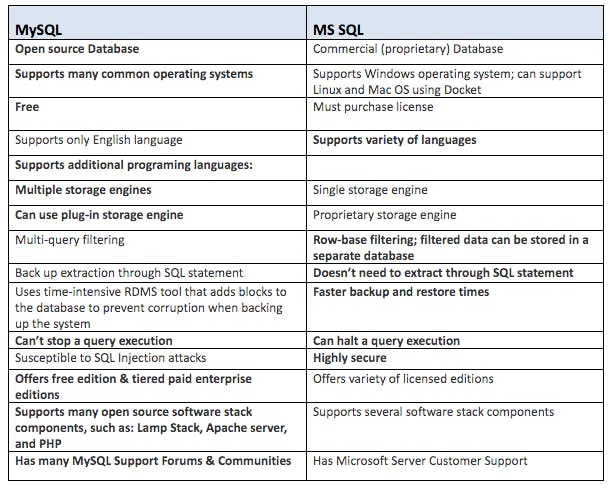 MySQL vs. MS SQL Server: Which is Right For Me?

Keep in mind that as a programmer or web developer, you’re going to be using your RDMS system all the time. Additionally, switching technologies in the future can become complicated. Therefore, it’s essential to choose wisely.

While most scenarios are in favor of the open-source MySQL, there are a few critical details that also make it unfavorable—such as security limitations, for example. Both MySQL and MS SQL servers are very popular among enterprise-level corporations and midsize and small businesses.

Here’s what it comes down to—personal preference, necessity, and the number of users.

Each edition of both servers come with a ton of different features and capabilities, so you’ll have to choose based on your technological needs, project needs, and personal needs. MS SQL seems to be the better-suited choice for enterprise-level businesses needing high security and more robust features. For small to midsize businesses using PHP or other supporting programming languages, MySQL will get the job done.

Technology development can be costly and time-consuming. If you plan to bring on outside help, you should talk to several teams and get a consensus on timeline, budget, and scope. Advice is free, so don’t hesitate to reach out to SF AppWorks today.

Related: Ready to Hire a Mobile App Developer? Here's What to Expect

When it comes to application development, there’s one methodology that many use alongside the SDLC (software development life ...
Start Reading
SF AppWorks Feb 7, 2022 6:08:00 AM 9 min read

How the data in your app is managed plays a crucial role in providing a great user experience. No matter how well your app's ...
Start Reading