If you are a sports marketer or uber football fan (or both) and you are headed to the Bay for Super Bowl weekend, we’ve got a short list of events you’re going to want to check out. Some of these super bowl events are invite only or come with a steep price tag so start working your connections now. 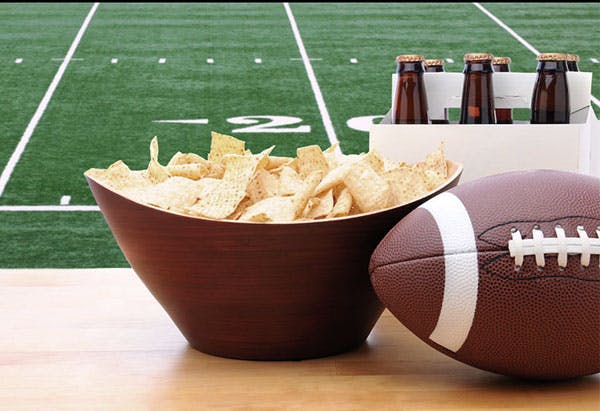 Gridiron Glory: The Best of the Pro Football Hall of Fame

The Triton Museum of Art joins the Super Bowl celebration by hosting the Pro Football Hall of Fame’s largest traveling exhibition in its history. The Pro Football Hall of Fame has lent to the exhibition the best of its vast holdings of football artifacts, rare photos and one-of-a-kind documents. In addition, NFL Films has provided spectacular footage from its unparalleled film archives to illustrate the exhibit’s many themes and storylines. Best of all, it’s free.

The NFL Experience is pro football’s interactive theme park experience will be held at the Moscone Center and will feature interactive games, the NFL PLAY 60 Zone for the youngest of NFL Fans, an opportunity for fans to meet some of their favorite NFL players of the past and present, autograph sessions, an up-close look at all past Super Bowl championship rings and a photo opportunity with the one and only Vince Lombardi Trophy.

Centered in Justin Herman Plaza, on the Embarcadero at the foot of San Francisco’s famed Market Street, Super Bowl City will feature family-friendly activities for fans of all ages. The City Stage will showcase a wide variety of live musical, cultural and performing arts entertainers with more than free 35 performances.

In honor of Super Bowl’s Golden Anniversary and for the first time ever, the highly publicized and anticipated kick-off parties to Super Bowl week will join forces to become one breathtaking event – Suits & Sneakers and Glazer Palooza. Suits & Sneakers, an annual kick-off to Super Bowl party, is partnering with Elevee Lifestyle, a luxury brand known for cultivating individuality through wardrobe and striving to create a style that articulates one’s own image, whether conservative or trend setting. For ticket information contact Vault Experiences or The h.wood Group.

NFL Films and the San Francisco Symphony: A Concert of Champions – 8pm

John Madden and John Brodie will be honored with 40 Hall of Famers and 40 NFL Legends in attendance. This is one of the more intimate events held during Super Bowl weekend. At the luncheon, guests can take photos with the Gold Jackets and Legends in attendance, sit at a table with a Gold Jacket, receive a one-of-a-kind autographed lithograph of John Madden, and listen to football Chalk Talk hosted by President David Baker. For table packages and sponsorship information, click here.

This exclusive red carpet entry event is presented by Silicon Valley natives and sports news experts Chat Sports and Sqor Sports. This extravagant event features artisan cocktails from specialty mixologists and dozens of NFL legends along with virtual reality experiences, live Q&A hosted by TV personalities, and behind-the-scenes tours of the Pac-12 Studios, which is the venue for this party. For media credentials, press passes & invitation inquiries, contact suzi@chatsports.com.

The NFL wants to see promising startups and technology that will advance the stadium or at-home experience, or improve the performance and safety of athletes. TechCrunch is bringing its experience with Startup Battlefield, one of the world’s premier startup competitions, to recruit and train contestants. The result is 1st and Future, a startup competition that will provide a disruptive view of the future. The audience will be NFL team owners and executives, in addition to the inner circles of Stanford and TechCrunch. TechCrunch will stream the entire event so everyone can follow along.

“In The Huddle” Hall of Fame Players Brunch – 10am

Noted as one of Super Bowl’s “top 12 events to attend”. The “In The Huddle” HOF Players Brunch allows an intimate number of guests to mingle with Pro Football Hall of Fame Legends prior to everyone enjoying the Nikko Hotel’s famous brunch. While sitting among guests, the HOF Players will begin to tell of memories from the turf, sidelines and locker rooms, field questions, and of course give their opinions on everything from the game then and now to how they see the upcoming Super Bowl unfolding. For tickets or sponsorship pricing contact megan@hofplayers.org.

As the anticipation grows for Super Bowl 50, Metallica will be hitting the stage for year three of CBS Radio’s “The Night Before” annual concert held on, you guessed it, the night before the big game on February 6, 2016 at AT&T Park in San Francisco. For ticket info visit Ticketmaster.

NFL Alumni along with 10+ Pro Football Legends are teaming up with Fleming’s Prime Steakhouse and Wine Bar, to throw a pre-game brunch on Super Bowl Sunday. The Event will feature Chalk Talk Sessions, game analysis from NFL legends and personalities, stories from past Super Bowls, autograph sessions and more! For tickets visit Eventbrite.

Erin Andrews will Emcee The Players Super Bowl Tailgate, Bullseye Event Group’s Super Bowl pre-game experience, where over 25 active NFL players, celebrities and guests eat, drink and get entertained before the Championship game. Described as a culinary experience in itself, the party features an open premium bar and all-you-can-eat dining with gourmet dishes that will be created by renowned celebrity chef Guy Fieri. Guests enjoy a hospitality lounge where they can watch ESPN’s pre-game coverage broadcast. When it’s time for the Super Bowl, guests travel to and from the Super Bowl stadium by round trip private motor coach.

If you see something you want to attend and you can’t find a way in, contact us and we’ll see what we can do to help. While you’re here, check out other posts from our Super Bowl series in our sports blog.

Sponsorship of the NFL is not cheap. However, if done correctly it is worth every penny. Campaign success can be easily ...
Start Reading
Daniella Mires Dec 17, 2015 2:19:00 AM 13 min read

#MNF. #NBAFinals. #JustDoIt. By now, we’re all well-versed in the sports-themed hashtag. But, these days, it takes a lot more ...
Start Reading