I’m going to admit something that I have never publicly or privately discussed with anyone – I was at the Apple Store the summer of 2007, waiting in a long line of anxious tech geeks, to touch and feel Apple’s most notable innovation to date – the iPhone. Since then, five versions of the device have been launched with new product features such as a larger screen, integrated camera, natural language voice control, retina display – every year I kept up with my addiction and would return to the Apple Store to upgrade. Whether or not I qualified for the 2-year contract upgrade didn’t matter one bit. I just wanted to be in the cool kids club and be an early adopter.

After purchasing 5 iPhones and experiencing issues with the longevity of the battery each time, I decided to chat with Android enthusiasts to learn which product features led them to convert from the most popular iPhone in existence to a new platform . . .the “unknown” (scary!). Most of my friends claimed that the interface was more intuitive, it has a larger screen making it easier to navigate and visually capture applications. Also, and most importantly (to me) was that, collectively, they all mentioned that the battery life specifically referring to the Samsung Galaxy lasts “a long time” (a lot longer than the iPhone battery).

I decided to bite the bullet and try out the unknown – the Samsung Galaxy SII – and so far, I really like it. It’s lightweight, easy to navigate and download apps and the battery life is exceptional!

In doing my initial research about the Samsung Galaxy, I intercepted an article in Time, which helped me make my decision to purchase the phone, but also opened my eyes to some compelling statistics in the ever-evolving smartphone market. Can both Android and iOS cohabitate in this connected society? Only time will tell.

The following data highlights the growing competition within the smartphone market. iOS and Android are neck-in-neck as platforms, which sustain and promote the development of new, interesting and useful apps – without apps, cell phone manufacturers have zero ammo. Worldwide, Android has been growing in popularity, with over 70% market share and 51% of the apps downloaded from the Android App Store. One could say that race for the best smartphone is tightening and over time more consumers will be curious enough to test out and purchase another device – just like I was.

Apps in Application Store
Apple and Google both have more than 800,000 apps available on their platforms 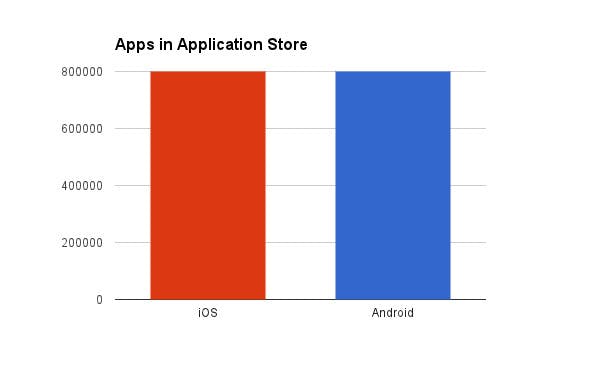 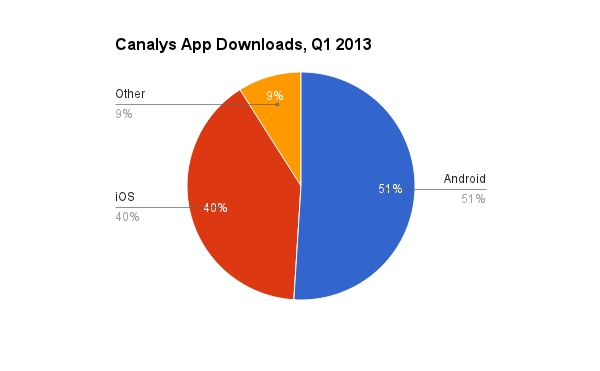 Image Credit:
Header Image – “The raging battle between Apple’s iPhone and Google’s Android” by Tsahi Levent-Levi is licensed under CC BY 2.0

How Long Does It Take to Create a Mobile App? The Truth | SF AppWorks

There are currently countless apps available in app stores, and there are more being added all the time. How long it takes to ...
Start Reading
SF AppWorks Jan 2, 2023 8:44:00 AM 12 min read

This comparison of hybrid apps vs native apps covers how each of these types of mobile apps vary, as well as the advantages and ...
Start Reading
SF AppWorks Jan 3, 2022 9:10:00 AM 17 min read

There were over 3.48 million apps and almost 2.22 million iOS apps as of the first quarter of 2021, not to mention countless ...
Start Reading