I often use this section of the Wonder to share things that I find interesting or helpful. You can think of it as a sort of PSA. This week, I’m trying something new – Three Neat Things. If you like the format and think I should continue including it in future Wonders, shoot me a note and let me know.

CORRECTION: Last week I incorrectly stated that a new method of ‘twisting’ light unlocks new channels of light to send data in, thereby leading to faster data connections. The process that Dr. Haoran Ten and his team pioneered actually works by using the shape of light (technically the oscillation), to encode data in a richer way. The light waves are twisted into a spiral to increase their encoding capacity, which in turn leads to faster data connections.

Researches at École polytechnique fédérale de Lausanne and Stanford University have developed a line of small flying bots that can lift 40 times their own weight.

Andrew’s Take: If you think about drone technology in phases, we’re entering into a really interesting phase three. In Phase one, drones were essentially unmanned reconnaissance airplanes – large and expensive and limited in what they could do and carry. In phase two, the technology improved to the point that average consumers could buy and pilot them, but they were still essentially cameras that fly. In phase three, drones may be able to move and lift things, opening the door for automated construction, advanced rescue operations, and, yes, food delivery drones (facepalm).

Darius’s Take: A few weeks ago we talked about small 3D printing drones working together to create structures underwater or in space. Increasing the lift capacity of drones while also figuring out how to coordinate tasks among multiple drones could lead to really cool new use cases. Also – designing the lift grippers after the toes of geckos shows once again that often the best product designs come from the evolutionary sandbox of nature. 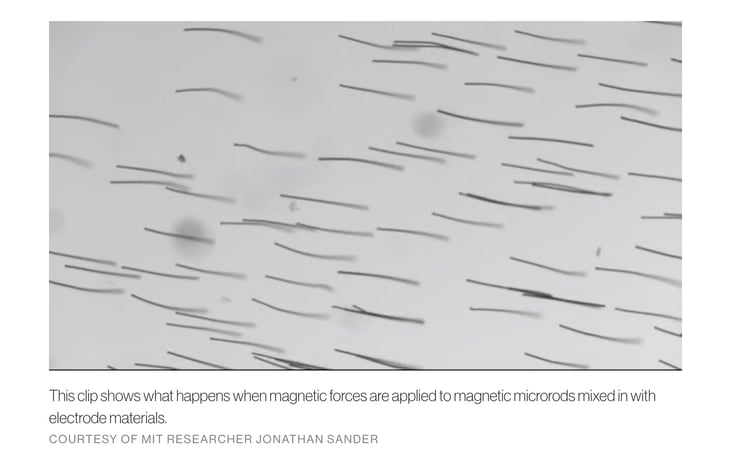 A professor from MIT and another from Carnegie Mellon have come up with a battery design that could power an airplane during takeoff.

Andrew’s Take: Air travel has missed the clean energy bus. Taking off requires a huge boost of energy that current batteries can’t provide. Yet air travel accounts for around 2% of global carbon dioxide emissions (and growing rapidly). Solving for this will be a big boost for clean air initiatives. It will also speed up the development of flying taxis.

Darius’s Take: It seems like every year there’s a new battery that’s supposed to change the world, but despite consistent improvement, they remain large, heavy, and inefficient. This time, rather than changing the composition of the battery, they are taking a shot at altering the alignment of the compounds with magnets to straighten out the path that lithium ions navigate through the electrodes. If it works it will mean a much higher rate of electrical discharge, which means batteries could be used in ways that they cannot be used today.

The Most Advanced Robotics Factory in the World

Swiss robotics company ABB has revealed that it’s spending $150 million to build an advanced robotics factory in Shanghai where robots will build robots.

Andrew’s Take: Cyberdyne Systems, er, I mean ABB is one of the largest manufacturers of robots in the world. They pioneered the first all-electric microprocessor-controlled robot and the world’s first industrial paint robot back in the 60s and 70s. They smartly partnered with IBM in the 90s to shift their core business to technology and to develop their own software, which they will now use to manage the movement of robots within the factory so that they can safely work alongside humans. Their significant investment in this factory reminds us that the robot industry is advancing quickly.

Darius’s Take: We’re in a bit of a technology race with China – scoring this factory seems like a point for China. These robots will be used to build more robots, and more types of robots, for Chinese companies.

The Fastest Human-Made Object Ever

Earlier this week, the Parker Solar Probe hit a speed of 158,486.94 miles per hour, making it the fasted human-made object ever. You can track the probe here.

A Weekly Snapshot of Life-Changing Technology   Our favorite thing about technology is that it offers game-changing potential ...
Start Reading
SF AppWorks Nov 16, 2018 2:43:00 AM 12 min read

A Weekly Snapshot of Life-Changing Technology Happy Friday! Society has been bracing for an era of automation where workers are ...
Start Reading
SF AppWorks Nov 16, 2018 2:41:00 AM 12 min read