With the sports industry on the rise according to the 2014 PwC Sports Outlook forecast, revenue is growing at a compound annual rate of 4.5 percent projected through 2018, we should expect more brands to be jumping into the sponsorship arena.

But buyers beware, whether you are new to the sports marketing discipline or just trying to stay on top of the latest trends, read on to win at sports marketing by avoiding these sponsorship fails.

With the average cost of a 30-second commercial during the Super Bowl doubling from $2.2 million at Super Bowl XXXIV in 2000, to around $4.54M by Super Bowl XLIX in 2015, deciding to play in this premier space is a big gamble. If you hit it just right you can earn back your money 10 fold but if you flop you’ve possibly cost your brand much more than this one time investment.

Let’s take a look at some Super Bowl Commercial flops.

Trying so hard we missed the point?

And one Super Bowl Commercial campaign that didn’t actually run in the Super Bowl.

Racism and Sexism two major areas of controversy and sensitivity. Generally as a brand you want to steer clear of anything that will come off in a negative light in both of these categories. We all know this, it’s common sense right? Well, unfortunately, it still happens so check yourself before you wreck yourself.

So, last year the New England Patriots reached 1M Twitter followers and celebrated by creating an auto-customizing jersey program that tweeted people a custom jersey if they retweeted the Patriots’ post. All tweets came from the official Patriots handle. Of course some nasty fan did this. 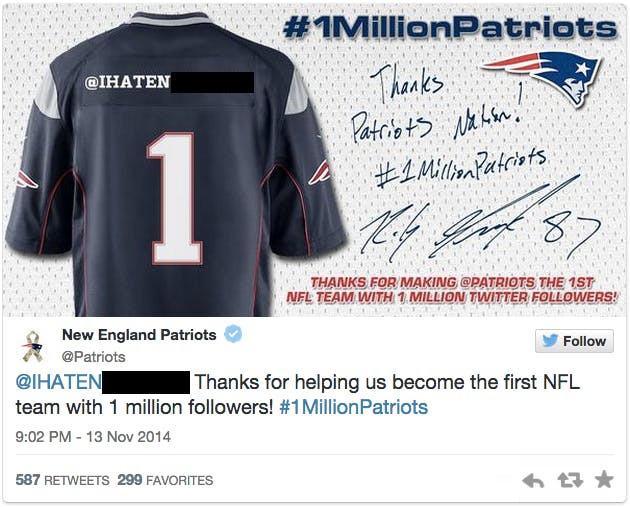 The moral of the story, make sure you have an administrator monitor and block content that is user generated. People can be ugly and tarnish your good name even when you have the best of intentions. Make sure you have mechanisms in place to catch and block this type of content before it goes viral.

On a sexist note, the NFL caught themselves trying to put women in pink and call it a day. In recent years, the league has seen women grow to become over 44 percent of its fan base. They recognized this as a marketing opportunity and to their credit tried to reach this new target group. However, their first attempts were not so productive.

NFL’s first run at female apparel included pink options in smaller sizes but not fit for women’s bodies or offering team colors. After alienating this audience and seeing little return on their women’s apparel business, they decided to invest in revamping their apparel division. Trusting in their talented female heads of apparel, retail strategy, and consumer product divisions they conduct research and launched a completely new and appealing apparel offering. Not only did they upgrade the look, they ponied up the cash for high profile female NFL fans, placed the ads where women look for fashion queues, and invested in shopping experiences in top NFL markets to get the word out.

The results, 125% sales increase in January 2011 from the previous year.

The Chicago Blackhawks decided to mix it up a bit for hat giveaway night back in 2009 by giving away Kenny Hard Hats instead of ball caps. Both Kenny and the Blackhawks thought this was a great idea, until Jonathan Toews decided to score his first hat trick. This ended up being pretty bad press for Kenny Hard Hats. Instead of protecting people, their hats became something that people needed protection from. Needless to say, that was the last night of the hard hat giveaway promotion. Luckily no injuries were reported in this incident.

We leave you with this piece of garbage, literally. The Seattle Mariners, in a strive to bring attention to environmental issues, sponsored several free compost nights. The only problem was they decided to send fans home with a bag of stadium trash. They later revamped the program to include composting kits, bags, and soil but this early campaign had already left fans a little raw.

If you like what you’ve read so far check out more of our blogs or subscribe for blog updates via email by clicking the link below. If you want to see more content on these or other topics please drop us a line and let us know.

At SF AppWorks Marketing Services, our mission is simple: To spread the love of sports and entertainment. With over 25 years of ...
Start Reading
Heather Fletcher Dec 21, 2015 11:28:00 PM 6 min read

Sports sponsorships have quickly become one of the most important tools in the $100 billion advertising industry. With that ...
Start Reading
Heather Fletcher Jan 19, 2016 11:16:00 PM 6 min read

If you are a sports marketer or uber football fan (or both) and you are headed to the Bay for Super Bowl weekend, we’ve got a ...
Start Reading