Importance of App Preview Videos & Screenshots for ASO. Updated for 2022

Screenshots are the best way to show off your app to the world. Customers don’t want to download an app without seeing it and its capabilities first. To ensure successful app marketing, think of your app screenshots as the first impression of your app, on your target audience.

If you don’t believe us, here are some undisputable facts:

You may have only a moment’s time before you influence someone to download your app. Once that window passes, you may not get a second chance. Therefor you should be sure that your screenshots convey all the benefits and capabilities of your app.

After answering these questions, you should decide which of these questions leads to the most compelling answer as to why your target user should download your app. The screenshot portraying this should be the very first screenshot that appears. This image will be the most viewed image, and have the greatest impact on people searching the app store.

Examples of the Best App Screenshots

Now that we have discussed just how crucial it is to focus on your app screenshots to enhance your app brand image, let’s have a look at some examples of app screenshots which deliver the most impact, compel users, and arouse interest in the app:

How to Make the Design of Your App Screenshots

Here are the things to keep in mind when creating screenshots for your app store page:

With the help of Apple’s App Store, you can submit both PNG and JPG format pictures. You can render JPG files at decreased quality setting which can decrease the overall size of the file.

Wherever it is possible, utilize PNG formats as they are come across with the best quality.

Use Exclusive Screenshots for All Devices

Many times, developers commit a mistake by submitting the largest app screenshot catering to all devices. The font typefaces differ for all devices however, and this can prove to be a blunder as scaling of the picture can’t always be to the point.

If the screenshots are hard to peruse, then it is likely that people will not download your app. The best thing to do is to capture screenshots according to each device and then let iTunes Connect take care of it.

Your Best Screenshot Should Be the First One

Your first app screenshot should be the most alluring. However, don’t cram extra, irrelevant, or too much information into this screenshot. It is also best to stay away from complex backgrounds and overwhelming text. Example: Here is the app screenshots of SportMe Marathon Trainer:

And these are the app screenshots for the Apple watch:

Highlight the Best Five Features of Your App

Keep It Spic and Span

Keeping background and text simple will get your message across. Utilize high contrast spaces and legible fonts. One great example is Dropbox, which makes use of white backgrounds. They also put screenshots front and center.

The more visitors can scroll through screenshots, the higher the chance of your app being downloaded by those visitors. Keep the screenshots different to keep the users curious and guessing. You can see how Facet uses these strategies.

Link the screenshots to show them as a single image. This will compel visitors to try to see the remaining image. You can see how Bustle links all screenshots.

Social proof works as strong psychological motivation, this shows your visitors how your app is popular. You can see how WeChat, Tandem, and Craftsy use social proof to their advantage.

With the help of app screenshots as well as text in screenshots, you can show your customers what they would be missing out on if they don’t download your app. Use the word ‘exclusive’ to show them the unique things they would be getting – courtesy of your app.

See these for an idea on app exclusivity:

Remind the customers again about the benefits of using your app. See how the 3 Minute Mindfulness app uses screenshots to convey benefits to users.

Other Handy Tips for Using the Best Screenshots 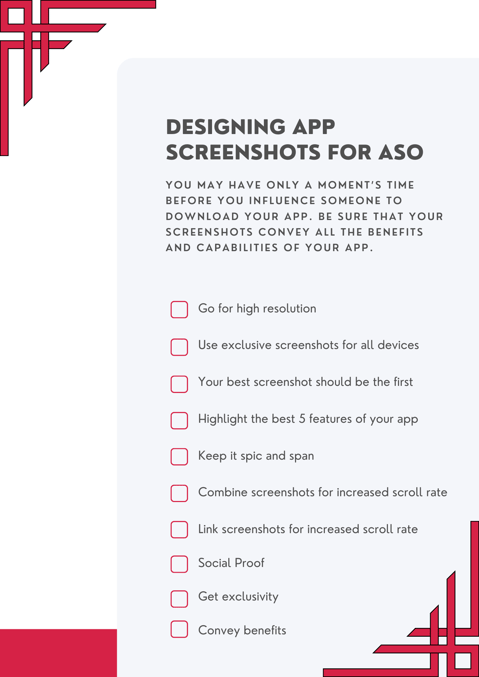 Using the popularity of video to reach your target audience is a great app branding idea. You can experiment with display advertising or product placement in video.

Why App Preview Video is Important for ASO?

According to a recent survey of the top 100 earning app developers, 98% of respondents use video advertising for acquiring users. This outranks all other paid channel alternatives such as Facebook ads and general display ads, print, out-of-home, and TV.

How to Create Your App Promo Video

Getting a quality video requires some essential steps:

Decide the key points, app’s main features, and competitive advantages you want to talk about. Also, include the problems your app solves. Include a verbal prompt to download the app so that the video is followed by downloads from your customers.

Get it rolling! Decide which screens and interactions you want to display. For videos, you should decide which concepts to include. App videos are anywhere from 30 seconds to 2 minutes long.

Decide if you want to keep it DIY or at a professional level. You can put together a video by using templates from many websites such as RenderForest, Placeit, VideoHive, and MakeWebVideo. However, if you want something customized and more professional, search out an agency.

With the help of some editing software like Windows Movie Maker or Apple’s iMovie.

Other Handy Tips for Using the Best App Preview Video

Now that the video is ready, put it on the forefront! Use video app install advertising to get the downloads up and rolling. For an increased reach, embed the video on your blog, website, social medial or an app landing page. Also, share it on YouTube or Vimeo for social sharing.

As San Francisco’s best mobile application development company, we know what we are talking about when we say that the two best ways to increase mobile app downloads are to optimize your app screenshots and demo videos. Nailing these will ensure that your app downloads skyrocket.

Let’s get it started!

The most common method for downloading new apps is app store browsing and searching. Up to 63% of app discoveries are made via ...
Start Reading
Jessy Faraday May 3, 2016 1:49:00 AM 5 min read

When 53% of apps are discovered through app store browsing, it becomes quite clear that your brand image must be strong enough ...
Start Reading